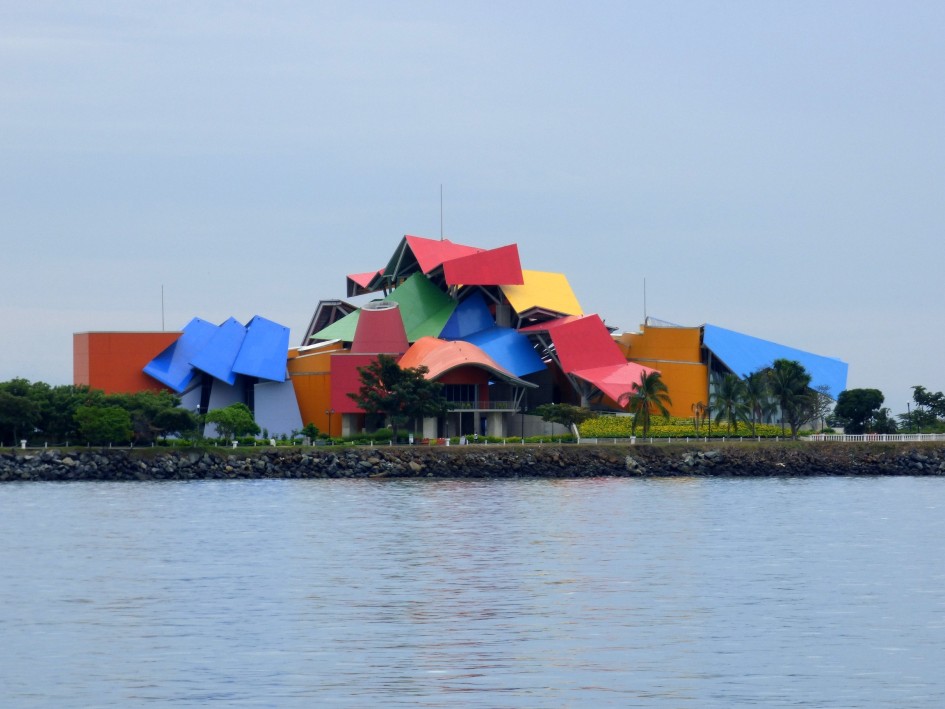 The Biomuseum is at the beginning of the Causeway in Panama City, and a taxi from Albrook Mall should only be a few dollars.

This was an article in the Visitor newspaper March 2017:

The Museum of Biodiversity or Biomuseum as is commonly known, it is not only a beautiful building, but also gives a three dimensional view of the Isthmus of Panama history and how it affected the rest of the world. Additionally to this, it explains in considerable detail the different habitats of the country and the animals and plants you might find in each one of them and therefore, it is one of the first places that a tourist should visit.

It is located on the Amador Causeway, a prominent area at the entrance to the Panama Canal next to the Pacific Ocean. The museum is surrounded by an enormous garden with native plants where in any given day butterflies, lizards and colorful insects can be found.

Designed by world-renowned architect Frank Gehry, the Biomuseo is his only work in Latin America and the tropics. The building was designed to tell the story of how the isthmus of Panama rose from the sea, uniting two continents, separating a vast ocean in two, and changing the planet’s biodiversity forever.

The Biomuseo’s 4,000 square meters contain eight permanent exhibition galleries designed by Bruce Mau Design. In addition to the main spaces, it has a public atrium, a space for temporary exhibitions, a shop, a cafe, and multiple outdoor exhibits displayed in the botanical park.

The permanent exhibition is a combination of art and science that allows the visitor to understand how the Isthmus raised from the seas. The Biomuseo’s permanent exhibition is titled Panama: Bridge of Life. Eight galleries and eight “devices of wonder” tell us about the origin of the Panamanian isthmus and its gigantic impact on the planet’s biodiversity.

The Gallery of Biodiversity: It is a huge multicolored stained glass, fourteen meters long and eight meters high, representing the explosion of life in Panama.

Panamarama: A three-story projection space with ten screens will immerse the visitor in an audiovisual rendering of the natural marvels that compose all of Panama’s ecosystems.

Building the Bridge: The tectonic forces inside the Earth that formed the isthmus are represented by three rock formations, fourteen-meters high, in a space full of tactile and physical encounters with the geological world.

Worlds Collide: Once the isthmus was formed animals from North and South America, began migrating using Panama as a bridge. The visitor is received by two animal stampedes representing the megafauna that began this unique journey almost three million years ago.

Human Path: In a partially open-air space, sixteen columns provide information on the relations between human activity and nature in Panama 15,000 years ago the estimated date when the first settlers arrived to the isthmus to the present.

Oceans Divided: Two 10-meter high, semi-cylindrical aquariums (currently under construction) will show how the Pacific and the Caribbean evolved in drastically different ways after being separated by the creation of the isthmus.

The Living Web: To demonstrate how living things need and compete with each other in complex and often invisible ways, a huge sculpture equal parts plant, animal, insect, and microorganism will immerse the visitor in a dimension where all living things are just as important.

Panama is the museum: Panels and displays show the relations between Panama’s biodiversity and the world, and offer access to a virtual network linking the museum with the rest of the country.