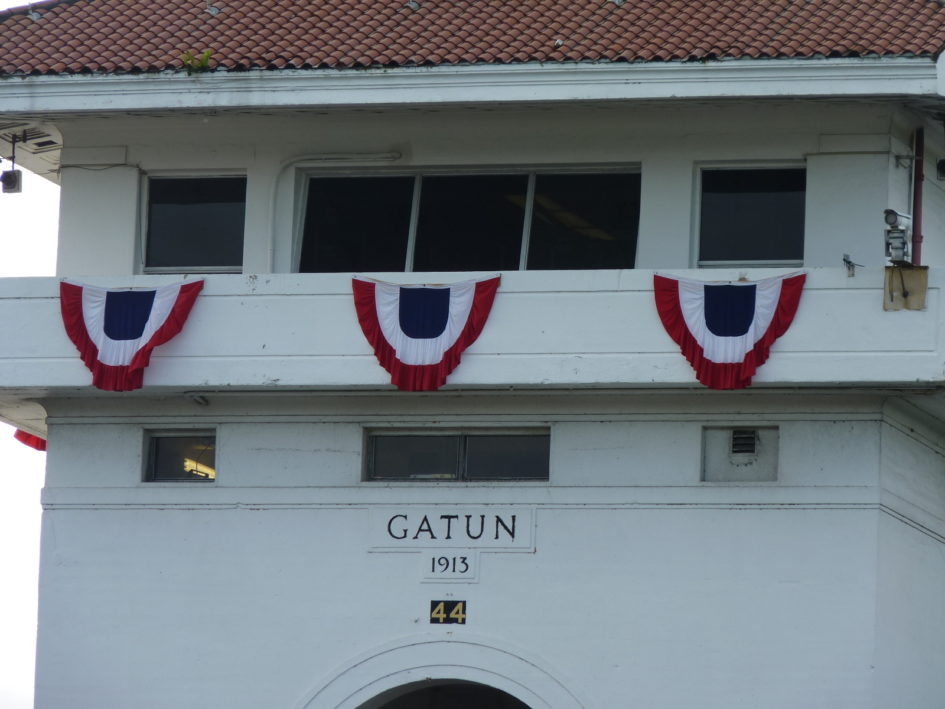 As you approach the Panama Canal, the first stage will be ascending through the Gatun Locks, which will take you up to Gatun Lake. You will see: If you look ahead you can make out where the channel splits and the new Agua Clara Locks are to the left, with Gatun Locks to the right.

Construction of this “third lane” actually began in 1939, because as soon as the Canal opened in 1914 it was obvious that it was already not large enough to handle the demand and the larger ships. The effort was abandoned as the US entered WWII, but the “US channel” was used as the beginning of the entrance channel to these Agua Clara Locks which were completed in 2016. As you get closer to Gatun Locks you will probably see several tugboats tied up on the port side.

These are usually the newest generation of tugboats, waiting to assist in the expanded locks. You can tell the new ones by the ‘bendy’ funnels. While the expansion was under construction, the ACP (Panama Canal Authority) had to implement ferries to transport vehicles across the Canal.

Just after the bridge you will see the landing stages on either side that the ferries used for almost three years. Some vehicles were allowed to cross the locks themselves, but most traffic was directed to the ferries. These locks consist of two lanes (east and west) each containing three chambers. Each chamber will raise your vessel 29 feet, giving a total lift of 87 feet. This is the lift from the Caribbean Sea (minimal tidal range) to the desired level of Lake Gatun.

The level of the lake is closely monitored by the ACP and is solely dependent on rainfall to keep the lake full. If excess rain overfills the lake then the sluice gates at Gatun Dam are opened. If the lake was to flood then water would spill over the inner chamber gates. Conversely if the water level of the lake decreases, due to lack of rain, then draught restrictions are applied to vessels wanting to transit.

There is a webcam, which captures vessels entering the locks from the north. The webcam can be viewed at www.pancanal.com (Multimedia). There is no “best” view of the locks operation because there is so much to see. From high up in a forward lounge you can get an overall view of the lock complex, on the foredeck you are closer to the action as the lines are connected to the mules, and from a balcony you might be on the right side to watch an adjacent ship go through the same process. On a lower deck or out of a low window you can almost touch the lock walls. It pays to move around the ship and check it all out.

Arrow Signals at Each Set of Locks As you approach each set of locks, you will see a large arrow located at the entrance (on the centre ‘island’ between the east and west lanes). These are designed to communicate the status of the locks with the approaching ships. A small one-lane swing bridge crosses the Canal at the base of Gatun Locks. The Atlantic bridge takes most of the traffic now, but you might see some vehicles crossing the bridge as you approach the locks.
We were recently told that the bridge used to close down operations for an hour every morning for traffic. Just prior to entering the first chamber of each lock you will see two men in a rowing boat approach the bow of your cruise ship. These men will take the heaving lines from the bow of your vessel ashore. This will allow the wire ropes from the mules (shore side locomotives) to be pulled over onto your ship.

At one point the rowboats had outboard motors attached, but they regularly fouled the heaving lines. Many other methods have been tried including shooting the lines, but it was decided to revert to the tried and trusted method of rowboats. From the outset, it was considered an important safety feature that ships be guided through the lock chambers by electric locomotives, running along the lock walls. These became known as mulas (mules, named after the animals traditionally used to cross the Isthmus of Panama).

Every vessel will pass through the locks under its own propulsion. The mules function is to keep the vessel centred in the chambers.

The mules weigh 50 tons each and operate with two traction units of 290 HP each. Traction is by electric power, supplied through a third rail laid below surface level on the land side.

The first mules/locomotives cost US$13,217 and were built by General Electric, an American company. The Japanese company Mitsubishi is the current manufacturer of Panama Canal locomotives, which cost US$2.3 million each. When you see a large ship anywhere, if it has lots of scrapes along the sides it has probably been through the Canal many times.

There are lots of plastic bumpers along the lock walls, and you will probably see where some have been ripped off or damaged. On the east side of the locks at Gatun (your port side), at the bottom of the steps going up to the old visitor centre building (now closed), you can see one of the original drive wheels used to operate the gates.

The wheel was powered by a 50HP electric motor, to which was attached a connecting rod, which in turn attached to the middle of the gate.

These mechanisms were replaced with hydraulic struts beginning in January 1998, after 84 years of service. These now operate with a 15HP motor. On the far side of the visitor centre building you might be able to see an old mule on display.

From the outset, it was considered an important safety feature that ships be guided through the lock chambers by electric locomotives, running along the lock walls.

These became known as mulas (mules, named after the animals traditionally used to cross the Isthmus of Panama). You will see these strange looking structures at all three sets of locks. They are practice targets for the ACP linehandlers.

A heaving line is a lightweight line with a weight at the end, usually a piece of lead wrapped in a knot called a monkey’s fist. The line is tied to a heavier mooring rope or wire, and then the weighted end is thrown between a ship and the shore, or from one ship to another, and used to pull the heavier rope across.

The ACP linehandlers hold competitions between teams representing each set of locks. Notice that many of the lock gates are doubled. This is a safety measure to prevent damage to any gates allowing Lake Gatun to drain into the ocean. Another safety measure was chain fenders installed to protect the gates in case of collision. These were stretched across the lock chamber to prevent a ship from ramming a gate, and then lowered into the lock floor to allow the ship to pass.

Each chain weighed more than 12 tons and was raised by a hydraulic cylinder system. An elaborate braking mechanism allowed a ship of up to 10,000 tons to be safely stopped. As ships got bigger (weighing over 60,000 tons), and given the expense of maintaining them, the fender chains were reduced in number in 1976 and finally removed in 1980.

You can still see the blocks that the chains ran through, and in the Miraflores Visitor Centre you can see some of the large chain. After your vessel clears the Gatun Locks, look on the starboard side and you will see the Gatun Dam. This was constructed between 1907-1913 and is THE secret to the successful construction of the Panama Canal.

US engineers realized that they had to somehow control the flooding of the Chagres River in order to prevent landslides during the wet season. By damming the Chagres they created Lake Gatun and were therefore able to control water levels and flooding.

A hydro-electric generating station at the dam generates electricity, which is used to operate the locks and other equipment in the Canal.

The earthen dam is 1.5 miles in length and is nearly 0.5 mile wide at its base. It contains 16.9 million cubic metres of rock and clay, equivalent to about one tenth of the entire excavation of the Canal.

Lake Gatun extends northwest from Parque Nacional Soberanía to the locks of Gatun, just south of Colón. It now serves as an anchorage for ships waiting for their turn in the locks.

Lake Gatun was created in 1913 when the US government dammed the Chagres River, so that ships could cross the isthmus at 85 feet (later 87 feet) above sea level, saving decades of digging that a sea-level canal would have required.

At the time of its creation the lake was the largest man-made lake in the world. This was soon to be surpassed by Lake Mead in Nevada, US. The theoretical size of the lake was 436km2. This was increased to 452km2 when more water was required by the construction of the expansion locks (opened in 2016).

Several towns and villages were submerged when the lake was created. The Panama Canal pretty much follows the course of the Chagres River between the Gatun Locks and the town of Gamboa. As you will see later during your transit, dredging operations are nearly full-time in order to safely satisfy the draught requirements of the neo-Panamax vessels.

At one time recreational vessels were allowed on the lake. However, this is not the case today. You will see some smaller motorised dinghies closer to Gamboa but these are operated by tourist operations, Smithsonian Tropical Research Institute or local Indian tribes. You might even spot a yacht or two but these will only be transiting the Canal the same as your cruise ship.

The lake itself is home to crocodiles, manatees and peacock bass, a species introduced from South America and popular with fishermen.

You are likely to enter the lake in the morning, so you will probably see quite a few large ships at anchor. They are waiting their turn to descend the Gatun Locks, or to pass through the Culebra Cut and descend into the Pacific. Just as you pass the Gatun Dam look to your port side and you will see the old Gatun Yacht Club. It is no longer used for recreational vessels, but the pontoon is used by cruise ship tenders to ferry people ashore for the cruise ships only doing a partial transit. Looking past the Gatun Yacht Club you will see the Agua Clara Panama Canal visitor centre located on a hill.

This picture shows dredgers working on the entrance to the new locks – the visitor centre is the complex on the hill.

If you have the time, this centre is worth a visit because you get an excellent aerial view of the Agua Clara Locks.