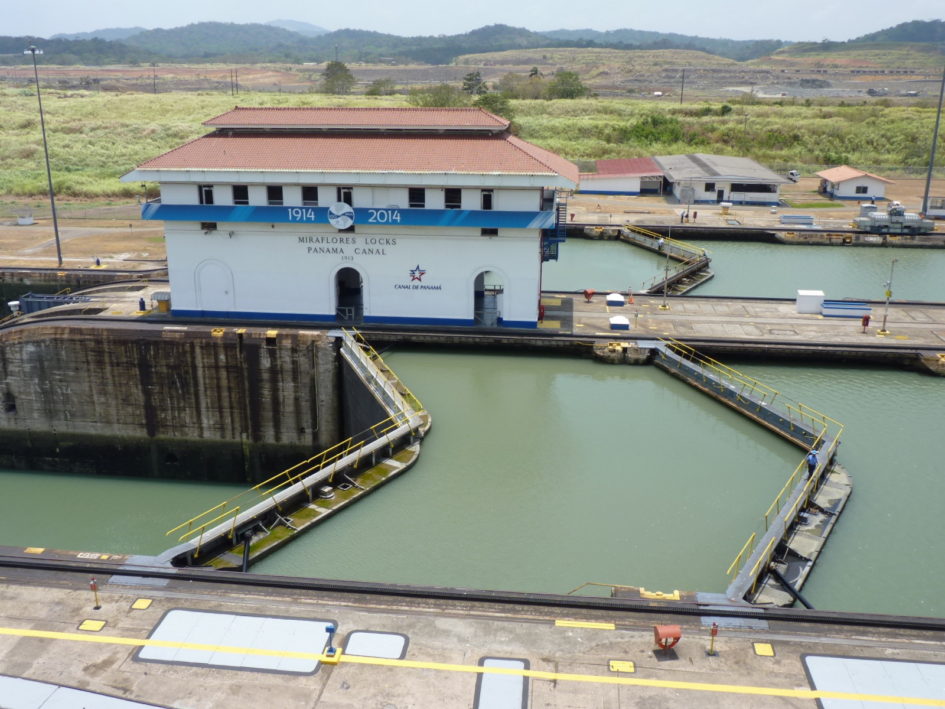 As your Panama Canal transit continues to the end of Culebra Cut, you will reach Pedro Miguel and Miraflores Locks. Here you will see: An important function of Lake Gatun is to provide water to Panama City. On your port side is one of the treatment stations. On the port side as you approach Pedro Miguel Lock you will see the landing station used by the ACP for the small crew boats and tugboats.

When a big ship goes through the Canal there will be a Pilot on board (maybe two or three), and the tugboats are operating 24 hours, with the crew of four (Captain, Engineer and two deckhands) changing out every eight hours. The tug continues whatever it is doing, so the crew boat brings each crew to where they are needed from here or another landing station.

There are also at least ten linehandlers that need to be taken out to each big ship, and any other personnel can be transferred as required. Ahead you will see that the Canal splits, with Pedro Miguel Lock to the left, and to the right the Pacific Access Channel which leads to the larger Cocoli Locks. This lock consist of two lanes (east and west) each containing one chamber. The chamber will lower your vessel 29 feet to Lake Miraflores.

Notice that the buoyage colours reverse once you pass through the locks. Just below Pedro Miguel Lock on your port side was the Pedro Miguel Boat Club, which serviced yachts for 65 years. You can still see the remains of the building, and even a yacht stranded on the hard, waiting for the owner to claim it! While Gatun Locks are a three-step system, the single-step Pedro Miguel and two-step Miraflores Locks are separated by the 1.5 kilometre long Lake Miraflores.

On your starboard side you might see a big ship moored to some enormous buoys. This is another place where ships can wait for the traffic through the narrow Culebra Cut to change direction.

The reason that the three chambers aren’t located in the same place, as they are in Gatun, is that an active Tectonic fault lies beneath the lake. This means that three adjacent chambers were unable to be constructed because of the engineering limitations of the time.

The new Cocoli Locks were constructed as a three-step system, which some experts consider a risky decision.

On your port side close to Miraflores Locks you will probably see a few tugboats and other vessels at a landing. This contains the maintenance facility, which also houses divers to work on the various ships. The Panama Canal project included one of the largest and most important electrical installations in the world early in the 20th century. On your port side you will see the Miraflores Power Station, which houses steam turbines.

Electricity was the power that ran Canal construction-era cableways, cranes, rock crushers and cement mixers. The General Electric Company produced about half the electrical equipment needed during construction and virtually all of the permanent motors, relays, switches, wiring and generating equipment. They also built the original locks towing locomotives and all of the lighting.

In 1914, the new Gatun Hydroelectric Plant took over the generation of the electric power required for the operation of the Canal. The construction plant and its steam turbines located at Gatun were shut down; the one at Miraflores was kept as a backup source of power in case of transmission problems. Wave to the tourists on the viewing decks, and to the webcam at the top of the red and white tower which is aimed at the lock chambers. The webcam can be viewed at www.pancanal.com (Look for Multimedia tab).

The centre houses several informative Panama Canal exhibits, and a theatre showing films relating to the Canal. There is also a simulator of the bridge of a large commercial vessel transiting the Canal, which is enjoyable.

If you do intend visiting the centre then do so in the morning because this is when you are more likely to see more traffic using the locks. After the north-bound traffic has passed through Miraflores during the morning there is a lull in proceedings awaiting the south-bound traffic, which will start appearing around 14:00.

These locks consist of two lanes (east and west) each containing two chambers. These will lower you to sea level. Welcome to the Pacific. If you are on a higher deck on a cruise ship, look past the Visitor Center to the century-old French locomotive that was recovered from the Canal in 2000.

The locomotives were built between 1882 – 1887 by the Belgian company La Societe Cockerill. Many of them were renovated and used for light work by the Americans. At the end of the Miraflores Locks there used to be a swing bridge, and you might see the old foundations and the road leading to the site just past the second chamber.

The bridge was built by the US in 1942 to provide the first way to drive across the Canal.

The Bridge of the Americas replaced it in 1962, but it remained an emergency bridge until it was finally removed in 2018.

Now you are almost at the Panama City End