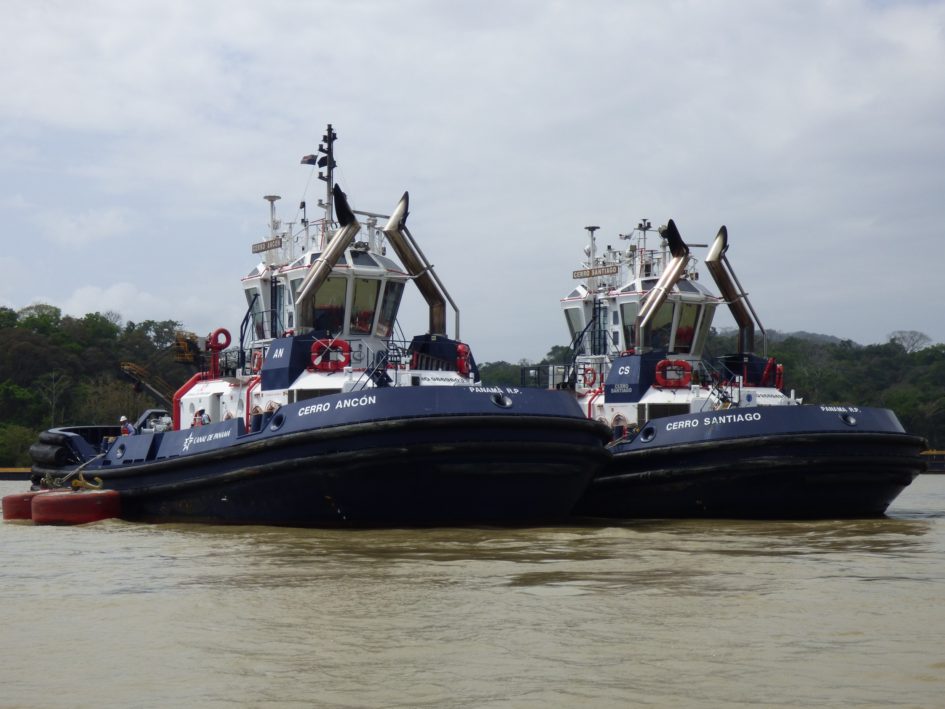 The ACP employs many ships and boats to keep the Panama Canal running: The ACP (Panama Canal Authority) operates a fleet of around 50 tugboats to assist ships through the Canal, and also to work in the dredging division and any other appropriate tasks.

There are five different types of tugboat, with the newest ones built in 2014 specifically for their task in the new locks.

These are bigger and better vessels with more fire-fighting capability as one of the biggest customers of the expanded locks will be LNG carriers.

There are no mules/locomotives in the new expansion locks so the ships are guided through with a tugboat attached at the bow and stern. Two further tugboats help to align the ship as it first enters the locks. These small boats are used to ferry Canal Pilots, tugboat crew, linehandlers and any other personnel between ship and shore.

There is seating for at least 30 people down below. Slips and obstructions to the shipping channel are always a threat, so the Canal is constantly monitored by survey vessels in case dredging or other means are required to keep the traffic flowing. Security is very important to the ACP and these small boats are constantly patrolling the waters, with a mandate to be able to reach any point on the Canal within 15 minutes.

It seems at one stage the local people were stealing the lights and other equipment off the buoys! You will probably see this ship at the tugboat maintenance division on Lake Miraflores.

Atlas III was built in 1934 in Panama to be used as a buoy tender. Her most frequent job in the early days was moving lock’s locomotives/mules from wall to wall or lock to lock using the 75-ton crane (locomotives weigh 55 tons). The cargo hold is large enough to hold locomotives.

The Atlas III was retired in 1996 as a work-horse vessel and replaced by the Oceanus named after another Greek God. The crane was removed from the Atlas III and installed on the Oceanus.

The Atlas III is used today as a training vessel for Panama Canal Pilots. This cutter suction dredge was built in 2008 by Dutch company IHC Beaver Dredgers BV at a cost of US$95.9 million. It arrived in Panama in April 2011 to dredge in Lake Gatun and Culebra Cut to a depth of 25 metres.

‘Quibian’ means union and adaptability and underscores the value of an indigenous leader of Veraguas in the 15th century who was considered the boss of bosses. Mindi was a cutter suction dredge that worked from 1943 to 2016. You might still see this anchored in the Canal somewhere. You might see this ‘spud’ in use or on the deck of a dredger.

A Cutter Suction Dredger (CSD) is equipped with a rotating cutter head, for cutting and fragmenting hard soils. The soil is sucked up by means of dredge pumps, and discharged through a floating pipeline and pipes on shore, to a deposit area. In some cases, the material is discharged into split hopper barges that are moored alongside the Cutter Suction Dredger. These split hopper barges unload the soil at the deposit area.

A CSD is a stationary dredger, i.e. it does not ‘sail’ when dredging. During dredging the vessel remains on the same location, secured by a spud lowered in the seabed. By means of winches and anchors, the dredger swings sideways and the cutter head cuts and removes the soil.

Larger CSD are self-propelled. This enables the vessel to sail by its own means to a new job location. The Christensen, which arrived in Panama from Hokodate, Japan, in September of 1977, is a diesel electric dipper dredge and the largest of its kind in the world. This is the 11.5m3 bucket used by the Rialto M. Christensen. Backhoe dredger designed, constructed and delivered by IHC Merwede in May 2013. The vessel is touted as the largest of its kind in the world.

The backhoe dredger measures 62.2 metres in length and 23 metres in breadth, with a 3.2 metres draught. It has a maximum dredging depth of 19.5 metres with a backhoe bucket of 31.5m³, is installed with a maximum power capacity of 3,000kW, and provides daytime accommodation for ten people.

This drilling barge was built in 1942. Four hydraulic towers use explosives to fracture the hard formations at the bottom of the navigation channel. Built in 2006 and named after Panama’s only volcano.

Entirely manufactured by Panamanians at the ACP’s Industrial Shipyard Division, the Barú is 51 meters long and 15 meters wide, nearly the size of two basketball courts.

Four drilling rigs can bore holes up to 30 meters in a single pass. The drilled holes are loaded with explosives and detonated to fracture the rock.

The blasted material is then removed by floating equipment, such as the dipper dredge the Rialto M. Christensen. Oceanus is a crane ship built in the USA in 1996, now used by the ACP for buoy and lighthouse maintenance.

It was the first vessel used to test the new Cocoli Locks.

There is lots of other ACP Equipment