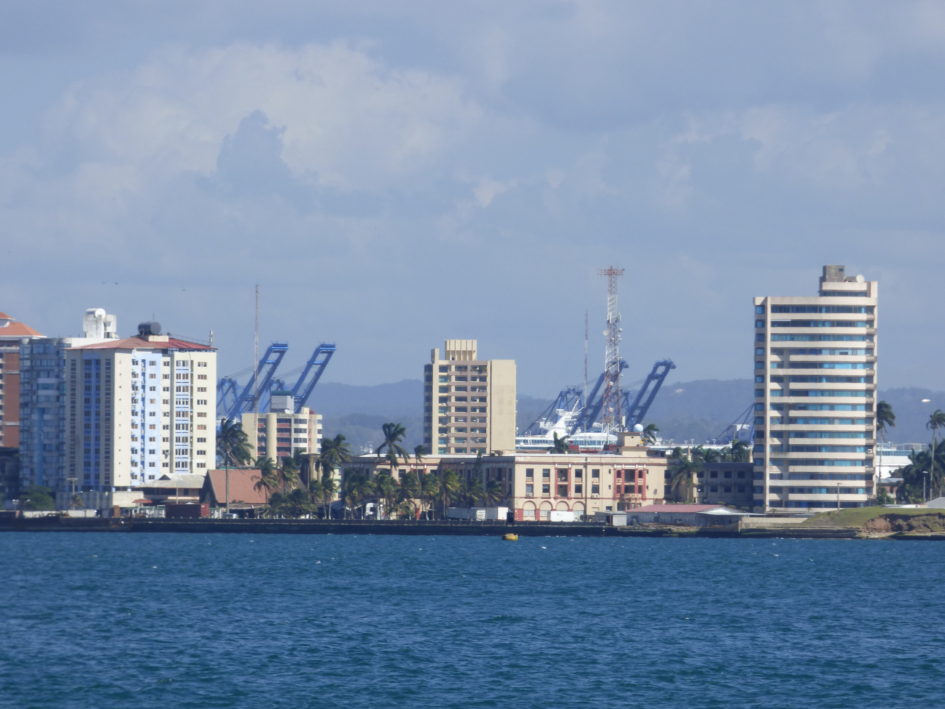 This guide depicts a trip from Colon 2000 cruise port to the Canal, but If your ship is coming from the Caribbean and heading to the Pacific, you will approach the Panama Canal past the City of Colon. On the way in you will see:

To your port side is the mostly low-rise city of Colon, behind the port. Your ship might have been alongside in Colon 2000 which is on the other side of the peninsula occupied by the city.

Colon is Panama’s second-largest city with a population of around 200,000. It was founded by the Americans in 1850 as the Atlantic terminal of the Panama Railroad. The now derelict buildings hint at the colonial grandeur, but for now the city is crime-ridden and not a place to wander around.

The settlement was first called Aspinwall, named for one of the builders of the railway. Colón is the Spanish form of Columbus; the neighbouring port is Cristóbal, Spanish for ‘Christopher’.

If you were tied up in Colon it was probably at this cruise ship terminal, known as Colon 2000. If you are at Cristobal Port you might have the opportunity to catch a taxi across to Colon 2000 where there is more to keep you occupied.

Colon is one of the few cruise ports where the dire warnings from the cruise line should be heeded! In one James Bond movie, the city was used to depict Haiti.

If you are moored at Colon 2000 you might see some yachts just forward of your cruise ship. This is more of a sport-fishing club that offers a small anchorage to yachts waiting to transit the Canal.

To your starboard side as you sail out of Colon 2000 are some old buildings at the base of the breakwater. These were part of the United States Navy facility of Coco Solo, with the huge container port now occupying most of the site.

Coco Solo was established in 1918 to operate as a submarine base and a naval air station. Five C-class submarines were based there during 1914-1919, and a squadron of P-38 Lightning aircraft was based there in WWII.

The port is actually two container terminals: Colon Container Terminal and Manzanillo International Terminal, which is the busiest container port in Latin America.

US Senator John McCain was born in 1936 at a small Navy hospital at Coco Solo Naval Air Station.

The Bay of Limon is protected by some huge breakwaters, originally built to protect the Canal from torpedoes. They are 6 miles (9.6 km) long and 425 feet (130 m) wide at the base.

Outside the breakwater you will probably see many big ships anchored, waiting for their turn to transit the Canal. Typically more than 40 ships will transit the Canal each day, and this screen grab from the Marine Traffic website shows the busy waterway.

Ships can book their transit in advance but this incurs an extra fee so many just turn up and wait their turn. A cruise ship will pay an extra $30,000 to ensure a daylight transit on the day they request.

The ACP (Panama Canal Authority) accepts cash only (or bank transfer), so some ships might be waiting for financing.

Delays might be caused if there is work being done on the locks that requires a lane to be closed down temporarily.

Some might have maintenance issues preventing their continuing on their passage (this unfortunately can include damage sustained in the locks).

As you enter the Bay of Limon sometime early in the morning of your transit, a Canal Pilot and crew of linehandlers will join your ship. There will probably be a Canal Guide as well, if the cruise ship does not already have one onboard.

The same crew boat is used to transport the Canal Advisor to a smaller private yacht. An Advisor is an employee of the ACP (Panama Canal Authority), but is not usually a big ship Pilot.

If you look to the starboard side, at the base of the breakwater you will see the masts of many yachts moored in Shelter Bay Marina.

On the shore to starboard are the old administration buildings of Fort Sherman. This was the primary defensive base for the Atlantic sector of the Canal, and also the center for US Jungle Warfare Training for some time.

The US governed the Panama Canal Zone from 1903 until 1979. In 1979 all unused area (mainly forest) and some non-military constructions, like hospitals and schools, were transferred to Panama. After the US invasion of Panama in 1989, some installations were reactivated, but formal US presence was ended by 2000, and all military areas and constructions were also handed over.

The Fort Sherman area is now derelict and being reclaimed by the rainforest, mostly because the Panama authorities could not agree on what to do with it. The area is protected by guards to prevent further destruction.

On the end of the peninsula, between two small high-rises is the coral-coloured New Washington Hotel.

More information can be found at www.newwashingtonhotel.com

Just to the left of the Washington Hotel is the oldest Episcopal Church in Central America, which was built by the Panama Railroad Company in 1864.

Through the cranes of the port you will see the spires of the Cathedral of the Immaculate Conception of Mary. Built in 1929 it contains stained glass from a Cuban artist. It is neo-gothic style, but was built in concrete and not in stone as was usual.

When your ship first passes the northern-most buoy of the Canal you will see a large (container) port on the port side. This is the Port of Cristobal, which is one of the oldest continuously operating commercial ports in Panama having a history of approximately 150 years.

The origins of the port are related to the construction of the Panama Railway and then the Panama Canal.
The port now services the Colon duty-free zone, which is the number one revenue earner for Panama; ahead of gambling at number two, and the Panama Canal at number three.

The Panama Canal Yacht Club used to be here, but this was removed to accommodate expansion of the port.

In front of the port, this building is just what it looks like. Cristobal Signal Station controls the movements of all ships in the port and heading to and from the Canal.

Just before the Gatun Locks on the starboard side you can see some of the French Canal construction effort.

The China Communication Construction Company designed this bridge which was built by the French company Vinci. It was supposed to be finished in 2014 with the expansion of the Canal, but it was finally completed in 2019.

This is the third (permanent) bridge crossing the Canal. The other two bridges, which you will pass under closer to the Pacific Ocean, are the Centennial Bridge and the Bridge of the Americas.

At the Miraflores locks, a swing bridge was built by the US in 1942 to provide the first way to drive across the Canal. The Bridge of the Americas replaced it in 1962, but it remained an emergency bridge until it was removed in 2018.

A fourth bridge is planned, which will be built right next to the Bridge of the Americas on the Pacific side.

Continue to Gatun Locks and Lake