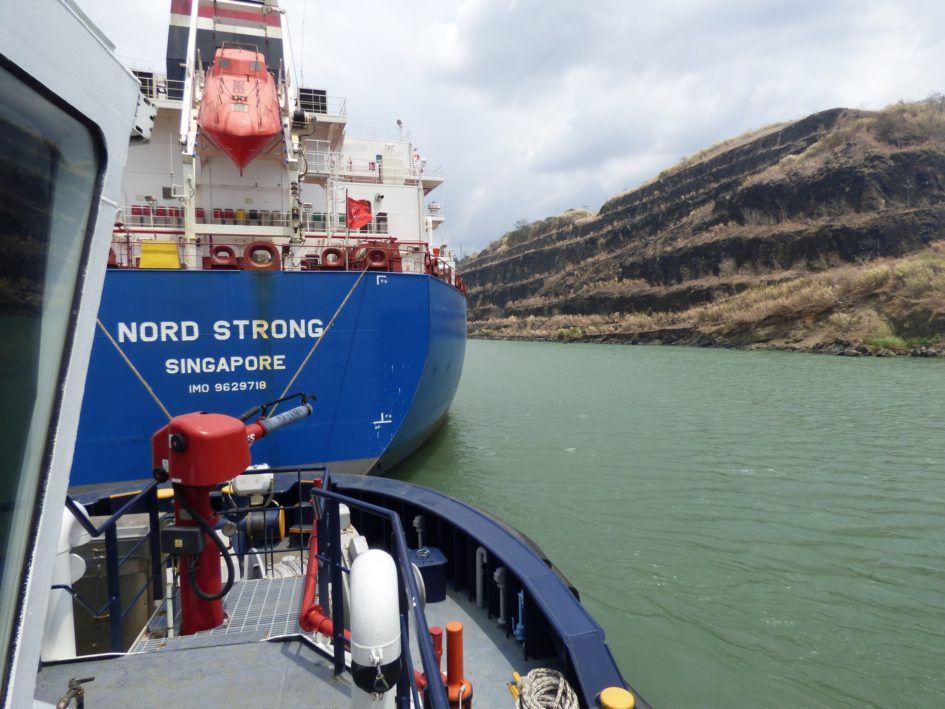 Your Panama Canal transit continues as you leave Gatun Locks. Your ship will cross Lake Gatun, pass Gamboa, and then sail through the narrow Culebra Cut. Some of the sights are:

This island was created when the waters of the Chagres River were dammed to form Lake Gatun in 1913, and It covers some 15.6 km2 (6 mi2).

It was set aside as a nature reserve in 1923 by the US Government. Since 1946 it has been administered by the Smithsonian, together with five adjacent peninsulas, as the Barro Colorado Nature Monument (BCNM). The BCNM has an area of 54 km2 and is among the most studied areas of tropical forest in the world.

The tropical forest is home to almost 400 species of birds, and more plant species than can be found in all of Europe.

When your ship passes around the top of Isla Barro Colorado you will see the landing station for the Smithsonian Institute’s biological research station.

The Smithsonian Tropical Research Institute (STRI) has this permanent research center on the island, dedicated to studying tropical forest ecosystems. Because the Island’s diverse ecosystem has been altered very little by humans, Barro Colorado has been studied for over eighty years within a great variety of biological disciplines

It is only possible to visit the island through the STRI for a guided tour of the facilities and a walk through the forest. Unfortunately the wait list is usually quite long.

To the north of Barro Colorado are the Islas Brujas and Islas Tigres, which together hold a primate refuge – visitors aren’t allowed.

As you approach Gamboa you will see a dock on the port side. The small boats that ferry people to Barro Colorado depart from here.

The town of Gamboa is located on your port side and is the point where the Chagres River feeds into the Canal and forms Lake Gatun. The town was built to house Canal workers in 1911, and is now the home of the ACP Dredging Division.

Here you can see the Chagres River in the top of the photo, passing Gamboa on the left side, with Culebra Cut heading south.

Gamboa is the name of a tree of the quince family.

You will know when you are close to Gamboa when you see the gigantic floating crane Titan. Among the largest floating cranes in the world, Titan was built by Hitler’s Germany in 1941 and claimed by the United States as war booty. The Navy operated it for over 50 years before selling it to the Canal for US$1 in 1998!

Titan entered service in Panama in 1999 after having served for 50 years in Long Beach, California. It can lift 350 metric tons and is one of the “strongest” cranes in the world.

Titan can be floated into the locks of the Panama Canal and is used for the heavy lifting required to maintain the lock doors of the Canal, which are serviced every twenty years.

These markings are on the anchor, note the swastika.

The Panama Canal Pilots recently negotiated a change to their contract whereby they now only complete half of a transit in one day. They change out near the town of Gamboa.

Just before the Gamboa Bridge, you might see some old Canal Zone housing through the trees.

On your port side you will notice a single-span road/rail bridge crossing a river. That river is the Chagres.

As soon as you are past this point you will be in the Culebra Cut, where most of the digging occurred.

A newer bridge was completed in 2018, on the far side of this one. Driving across the old bridge was a little nerve-wracking as you were balancing on two rows of railway sleepers that were often loose or missing. The locals call this one the “God help me” bridge, and the new one is the “Thanks to God” bridge.

In 2020 a large ship collided with the bridge causing extensive damage.

After passing the town of Gamboa you will see Renacer prison on the port side, which was the ‘home’ of Manuel Noriega (1934-2017), a former Panamanian politician and military officer. He was the military dictator of Panama from 1983 to 1989, when he was removed from power by the United States during the invasion of Panama.

From the 1950s until shortly before the US invasion, Noriega was one of the CIA’s most valued intelligence sources, as well as one of the primary conduits for illicit weapons, military equipment and cash destined for US-backed counter-insurgency forces throughout Central and South America.

Noriega was also a major cocaine trafficker, something which his US intelligence handlers were aware of for years, but allowed because of his usefulness for their covert military operations in Latin America.

Noriega served time in the US and France for drug trafficking, racketeering, and money laundering, and is now in Panama prison for murder and human rights violations.

The mountain range that the Panama Canal cuts through is called the Cordillera de Talamanca near the Costa Rican border. Farther east it becomes the Serranía de Tabasará, and the Canal is located in the portion called the Sierra de Veraguas.

From 1915 to 2000 the Cut was named Gaillard Cut after US Major David du Bose Gaillard, who had led the excavation. After the Canal handover to Panama in 2000, the name was changed back to Culebra, which means ‘snake’ in Spanish.

Construction of the Cut was one of the great engineering feats of its time. It is 12.6 kilometres (7.8 miles) from the Chagres River arm of Lake Gatun to Pedro Miguel Lock on the Pacific side. The narrowest point is 600 feet (currently dredging) and the widest at Gamboa is 1,000 feet. The lowest point in the saddle between Gold Hill to the east and

Contractors Hill to the west was 333.5 feet above sea level. The excavation cost of the Cut was US$10 million/mile.

On the port side, Gold Hill is the highest promontory along the Cut rising 662 feet above sea level, and therefore it denotes the area where the most digging was required.

Opposite Gold Hill, on the other side of the Canal, you will see Contractors Hill with an elevation 333.5 feet above sea level.

Both of these hills were ‘responsible’ for the numerous landslides, which delayed the completion of the Canal. This is the reason that both hills are terraced and are closely monitored for potential land slips.

One suggestion for the name was that the workers were told there was gold in the hill to encourage their digging efforts.

On your port side, almost under the Centennial Bridge, is a dock which might have a ship alongside. This is one of the places where ships can wait for the traffic to change direction through the narrow Culebra Cut, and also an emergency dock. Usually ships go north in the morning and south in the afternoon.